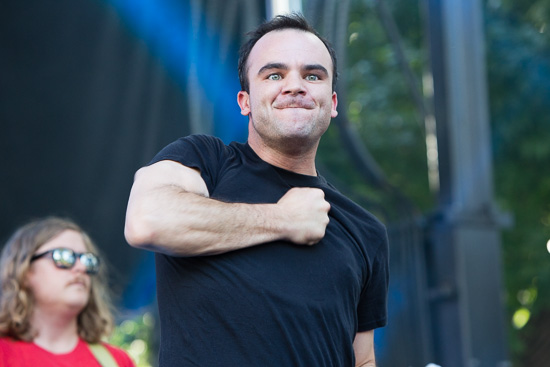 About a year ago, we posted a video of a group of dudes chopping melons with chain saws and setting off explosives with their runaway RV. The track featured in the clip is Future Islands’ rally cry, Balance. The antics make for a great cut, but the video is nothing without lead singer Gerrit Welmer’s voice to lead it forward. It’s as rough as gravel – a deep baritone, sulking and growling, before soaring upwards as if possessed by a gothic demon.

Since then, Future Island has gained some mainstream popularity after they performed Seasons (Waiting On You) on David Letterman. Gerrit Welmer’s stage presence was so electric that the video became an unexpected hit, going viral and inspiring several memes. The band says that they feel “in their element” when they play live. And it’s certainly no humble brag. Search “Future Islands” on YouTube and see for yourself how the group can captivate an audience.

That being said, I’ve never encountered such a polarizing act. Some people (specifically one anonymous YouTube commenter) can’t stand Gerrit Welmer’s ghoulish presence on stage, while others relish in the strangeness that is Future Islands. So, time to decide for yourself.